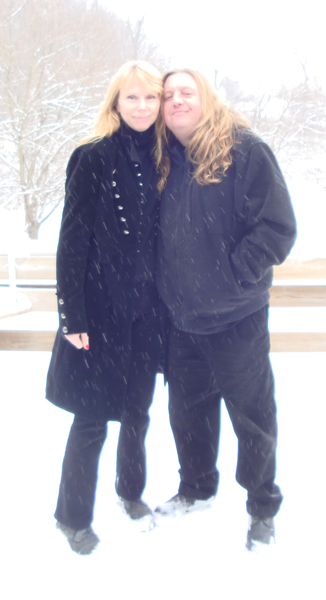 Bonnie and John Mitchell welcome you to Awakenvideo.org

Bonnie Jean Mitchell is a life-long contactee who has interacted with friendly, multidimensional “star people” since she was a young child. She has also experienced negative alien abductions and military abductions known as MILABS. She did her first interview about alien abduction with the Edgar Cayce Foundation in 1993 and has been helping contactees and abductees ever since. In the year 2000, she graduated from The College of William & Mary and began working on her first book, Invitation to the Self; journey with the star people, published in 2005.
Her website, alienabductionhelp.com, is a supportive environment for contactees and abductees.

John Mitchell, with a background in the U.S. Navy and U.S. Merchant Marines, traveled to the infamous Area 51, Nevada and filmed dozens of daytime UFOs in 2006. His experience included five hours of missing time and the filming of two UFOs leaving the scene of his abduction. These events began John’s research which has revealed connections to both the enslavement and the freeing of mankind. John wishes to enlighten others to Truth to help expand their consciousness.

Together, Bonnie and John run Awakenvideo.org, an anthology of videos with categories like DNA Activation and Ascension, Reptilians, Masons and the New World Order, Alternative Energy, Sacred Geometry, HAARP and Project Blue Beam. Their current focus is the danger of Television Sigil Magick.